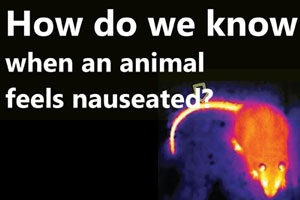 It is thus a big advantage in such drug development if animals could be monitored accurately for nausea. The main problem here is that most laboratory animals are not able to vomit, and even in those that possess vomiting reflex, it is impossible to assess their nausea-like state as until now there were no adequate ways to objectively measure it. Dr. SukhontharNgampramuan and her team have come up with a new solution. They found that similar to humans, rats and musk shrews drop theirbody temperature when they have motion sickness. Also similar to humans, this happens due to dilatation of the skin (tail) vasculature that facilitates heat dissipation from the body. This response is very robust, and could be measured by infrared thermography, as shown in the figure. Now we can accurately detect and monitor nausea in animals with simple non-invasive monitoring of skin temperature. This will facilitate further understanding of neural mechanisms of nausea and development of anti-nausea drugs, which are needed for a many patients, especially those who receive anti-cancer chemotherapy.