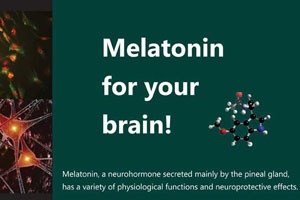 Melatonin, a neurohormone secreted mainly by the pineal gland, has a variety of physiological functions and neuroprotective effects.

It is widely used for insomnia and supplement in elderly. New evidence from animal experiments suggests that melatonin may offer some benefit for brain function. Prof. Piyarat Govitrapong and her team found that melatonin modulates the proliferative ability of precursor cells from adult rat subgranular zone in hippocampus. Besides increasing the proliferation, her data also demonstrate that melatonin facilitates the transformation of precursor cells into neurons. As stem cell replacement is thought to play an important therapeutic role in neurodegenerative diseases, melatonin might be beneficially used for stimulating endogenous neural stem cells. Because melatonin can cross the blood brain barrier and is soluble in both lipid and water, this intrinsic modulator might be beneficially used for stimulating endogenous neural stem cells. It is anticipated that clarification of the sites and mechanisms underlying the induction and modulation by melatonin will indicate novel strategies for the treatment of neurodegenerative diseases and neurodevelopment disorders.