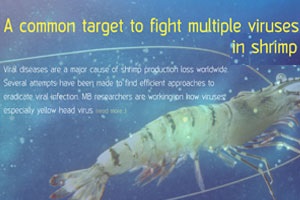 Viral diseases are a major cause of shrimp production loss worldwide. Several attempts have been made to find efficient approaches to eradicate viral infection.

MB researchers are working on how viruses especially yellow head virus (YHV, a lethal virus that can kill shrimps within 3 days) enter and multiply in shrimps. As suspected, it was found that YHV utilizes a common pathway to infect shrimps. The virus enters into shrimp cells by interacting with its binding protein, PmYRP65, and getting internalized via clathrin mediated endocytosis. This process requires clathrin heavy chain (PmCHC) and adaptor protein, AP17. A recent study has identified a small GTPase protein called PmRab5, which is a key regulator for YHV transportation from plasma membrane to the early endosome.

Suppression of PmRab5 by using double stranded RNA targeting to PmRab5 resulted in inhibition of YHV replication probably by blocking the virus transportation from early to late endosome. Furthermore, it was demonstrated that suppressing PmRab7 (a late endosomal protein) expression by double stranded RNA resulted in inhibition of not only YHV but also other viruses such as WSSV, LSNV, TSV and IHHNV. These results suggest the possibility to use a common target such as PmRab5 or PmRab7 to fight multiple viruses in shrimp.