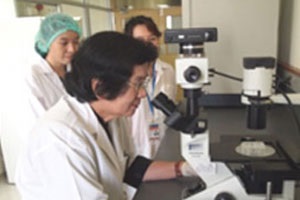 Neurogenesis, a process of generating functionally integrated neurons from progenitor cells, was traditionally believed to occur only during embryonic stages in the mammalian CNS.

Only recently as it become generally accepted that new neurons are indeed added in discrete regions of the adult mammalian CNS. The discovery of a continuous neurogenesis in two areas of the adult brain, the subgranular zone (SGZ) in the dentate gyrus of the hippocampus and the anterior part of the subventricular zone (SVZ) lining the lateral ventricle, changed the previous concept of the mammalian adult nervous system and lead to the new theory that regeneration of neurons may occur throughout life. Adult neurogenesis is a process that leads not only to the generation of new neurons from adult neural stem cells but also functional integration of these new neurons into the mature neuronal circuit. Because the proliferation and differentiation of the immature precursor cells (neural stem cells) are dynamically regulated by various hormones and growth factors under physiological and pathological conditions, the identification of signaling molecules that regulate neural stem cell activities may contribute to the understanding of neural ontogeny and to the development of new growth factor agents for the treatment of certain neurological diseases.

Melatonin, or 5-methoxy-N-acetyltryptamine, is a circadian rhythm hormone secreted mainly by the pineal gland. Although melatonin possesses multiple physiological functions, the antioxidant action has attracted much attention recently. Furthermore, increasing evidence suggests that melatonin might be an interesting agent in the context of neurogenesis. However, the role of melatonin in the regulation of neurogenesis is not known. The results of our recent studies show that melatonin modulates the proliferative ability of precursor cells from adult mouse SVZ in a concentration-dependent manner. Besides increasing the proliferation, our data also demonstrate that melatonin facilitates the transformation of precursor cells into neurons. Melatonin modulates the function of precursor cells via the membrane MT1 melatonin receptor. The stimulatory effect of melatonin on precursor cell proliferation was antagonized by luzindole and prevented by pretreatment of PTX in our study.

Double-labeling for MT1 and Ki67, ?-III-tubulin, or GFAP in the present study showed that MT1 was expressed in cells during both proliferation and differentiation periods. Our result showed that melatonin promoted the proliferation of precursor cells and the differentiation of precursor cells to neuronal cells without up regulating the number of GFAP cells. In addition the effect on mature neuron or age-related brain, enhancement of neurogenesis by melatonin may contribute to the beneficial effects on hippocampus plasticity and resistance to age–related neuronal degeneration. In addition, we further investigate whether melatonin can enhance the neurogenesis in hippocampus in order to promote the learning and memory process in young and/or elderly individual. It may also be possible to entrance brain function during early and aging brain development and resistance to injury and disease in humans.

Replacement strategies typically contemplate injecting neural or embryonic stem cells that may have been partially differentiated in vitro into the mature CNS, with the hope that these cells will restore lost function. Some disorders seem more amenable to this approach than others. Parkinson’s disease, for example, is considered to be a good target since the cell type that needs to be replaced and its location are well known. Other disorders such as Alzheimer’s disease pose greater challenges since the cell types lost are more diverse and the disease ultimately spreads diffusely. Given the widespread existence of endogenous neural progenitors even in non-neurogenic brain regions, an attractive alternative to transplantation would be to harness the potential of endogenous progenitors to repair cellular injuries. As stem cell replacement is thought to play an important therapeutic role in neurodegenerative diseases, melatonin might be beneficially used for stimulating endogenous neural stem cells.

Because melatonin can cross the blood brain barrier and is soluble in both lipid and water, this intrinsic modulator might be beneficially used for stimulating endogenous neural stem cells. It is anticipated that clarification of the sites and mechanisms underlying the induction and modulation by melatonin will indicate novel strategies for the treatment of neurodegenerative disease and neurodevelopment disorders.