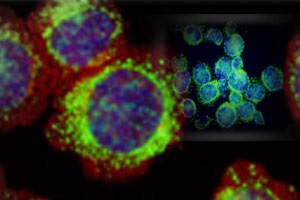 The virus is spread by mosquitoes and can cause a range of illness in humans from a relatively mild fever to a severe state characterized by hemorrhage and plasma leakage. There are four dengue viruses (DENV-1 to DENV-4), all of which are circulating in Thailand and while, broadly speaking there is no difference between the four viruses in terms of disease severity, severe disease most commonly occurs in second infections with a different dengue virus from the first infection. In these situations it is believed that the immune response raised against a first infection interacts with a second infecting virus making the disease more severe, probably by increasing the number and types of cells infected in the patient. In countries with a good medical infrastructure and extensive experience of treating dengue patients death of the patient is relatively rare, but does occur.

On the cellular level however the picture is very different and the death of dengue infected cells is a common occurrence. While numerous studies have shown that both primary and transformed cells undergo apoptosis in response to dengue infection, the mechanism by which this occurs remains the subject of considerable controversy. Apoptotic cell death occurs through two main pathways, an intrinsic pathway mediated by events occurring inside the cell and an extrinsic pathway where the death signal occurs from outside the cell. Both pathways have been implicated in mediating cell death in dengue infected cells.

To investigate the mechanism of cell death that occurs in secondary dengue infections we used a model monocytic cell line (U937 cells) and infected cells separately with all four dengue viruses in the presence of non-neutralizing antibodies to mimic the process of antibody dependent enhancement of infection. We documented the activation of a number of ER stress response pathways (the unfolded protein response and NOXA/PUMA) in response to infection and showed that both intrinsic and extrinsic cell death pathways were activated by the infection. Of particular importance our study showed that the activation of the unfolded protein response, as well as the amount of apoptosis was equal for all dengue viruses when infection was performed under conditions that gave equal degrees of infection. Our results suggested that TNF-alpha was instrumental in activating extrinsic cell death, and by implication this may also serve to induce apoptosis in surrounding, uninfected cells as a way of limiting the ability of the virus to infect neighboring cells. Overall our results show that there is a significant degree of redundancy in the activation of cell death in response to dengue infection and that infection of monocytic cells by the dengue virus leads to an unalterable commitment to cell death.

The original article was published in the January 20th 2011 issue of the Journal of Virology:
Klomporn, P., Panyasrivanit, M., Wikan, N. and Smith, D.R. Dengue infection of monocytic cells activates ER stress pathways, but apoptosis is induced through both extrinsic and intrinsic pathways. Virology 409: 189-197, 2011.

Vitamin D is one of the 13 vitamins that we need to maintain our health and wellbeing. We can obtain vitamin D from our diet (oily fish, liver, egg yolks) and additionally we can produce vitamin D from cholesterol when we expose our skin to sunlight. While vitamin D is well known as playing a role in building healthy bones through regulation of calcium and phosphorus, evidence is emerging that vitamin D may play a role in combating infections.