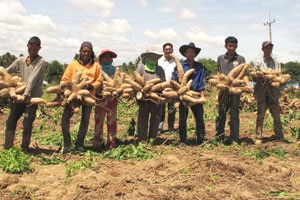 Cassava is one of the most economically important crops in Thailand. During the years 2009-2010, Thailand produced some 22 million tons of cassava and exported it in the forms of cassava flour, chips and pellets generating a total income of about 66 thousand million baht.

However, decreased cassava production has been reported due to problems with outbreaks of pests and diseases as well as natural disasters including flood and drought. At the same time as the production of cassava has been limited, demand for cassava products for industrial applications has increased, especially for ethanol production. Therefore, breeding of cassava with high yield and resistance to pests and diseases is essential in order to secure a sufficient supply for cassava industries. Generally, cassava breeding programs in Thailand are based on conventional breeding methods which have important drawbacks, including time and cost requirements. Additionally, breeding for some traits, especially resistance to pests and diseases that cannot be directly observed in the field is not effectively achieved by conventional methods. Therefore, the application of molecular marker technology to assist with breeding programs is essential to overcome these limitations to develop new cassava varieties with desirable properties that are suitable for both agricultural and industrial uses.

Our work over the last 6 years has focused on developing the most important tool for molecular based breeding programs, a high resolution genetic linkage map of cassava. To obtain this objective, two F1 mapping populations were created in 2006 by reciprocal crosses between ‘Huay Bong 60’, a cultivar with high fresh root yield, starch and cyanogen content, and ‘Hanatee’, a Thai variety that has low fresh root yield, starch and cyanogen content. We subsequently developed 2,140 molecular markers consisting of 640 Simple sequence repeat (SSR) and 1,500 Expressed sequence tag-simple sequence repeat (EST-SSR) markers which combined with additional markers from published databases were used to construct the first detailed high density genetic map of cassava. This map is composed of 510 loci, encompassing 1,420.3 cM, distributed on 23 linkage groups with a mean distance between markers of 4.54 cM. We have used this map to identify for the first time quantitative trait loci (QTL) underlying agronomically important traits including fresh root yield, starch and cyanogen content, starch physicochemical properties and plant and first branch height that will be effectively applied to marker assisted selection (MAS) of cassava breeding programs in Thailand. This will also directly benefit cassava farmers in terms of increasing in their productivity which will lead to a better quality of their life due to higher income.