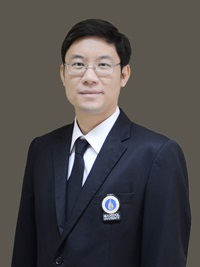 The ultimate goal of Prof. Narattaphol’s work is to answer the question of how to help Thai people have strong and healthy bone? This question should bring awareness to the future risk that comes with aging population and should be included in the public health policy. Aging is usually accompanied by degenerative bone diseases, metabolic bone diseases, and fractures that are expensive to treat and eventually lead to morbidity and mortality. Better understanding of the mechanism of overall calcium-regulating system is required to optimize efficiency of prevention and treatment (e.g., calcium supplementation). To achieve this goal, Prof. Narattaphol and his colleagues use various multidisciplinary techniques, e.g., organ transplantation, electrophysiology, biophysics, X-ray imaging, micro-computed tomography, bone histomorphometry, molecular biology, and bioinformatics, to elucidate in depth the calcium-regulating machinery. His work is communicated in the form of published scientific papers, as well as other forms of media, such as interviewed articles in newspapers, magazines, radio, and television broadcasting, for health promotion (e.g., concept about swimming, running and other types of exercise) and medical prevention (e.g., calcium supplement in osteoporotic patients and breastfeeding mothers). Examples of research output, outcome and impact are as follows.

Approximately 85% of the intestinal calcium absorption occurs through the space between cells (known as paracellular pathway). Little is currently known as to how paracellular calcium transport is regulated. Prof. Narattaphol and his colleagues have recently identified, for the first time, that a new protein named claudin-15 is important for this transport mechanism. Thus, understanding of the function and regulation of this protein (together with Cav1.3) is crucial for the design of better calcium-fortified tablet and diet to maximize calcium absorption efficiency to improve calcium metabolism for pregnant and lactating women.

Because breast milk is the major source of nutrients for the offspring, mothers transfer a huge amount of calcium into milk, leading to a low bone mass (osteopenia) or even osteoporosis. Prolactin surge, which normally occurs during breastfeeding, markedly increases the intestinal calcium absorption by two folds. Recently, Prof. Narattaphol and colleagues have provided evidence that calcium supplementation at 30–90 min prior to breastfeeding maximally benefits calcium metabolism in both maternal rats and newborns, and reduces the severity of lactation-induced osteopenia.

Under normal conditions, calcium absorption in the cecum contributes only 5% of the total intestinal calcium absorption, in part, due to the formation of insoluble (non-absorbable) calcium complex in alkaline environment. However, Prof. Narattaphol and colleagues have provided evidence, for the first time, that surgical removal of the cecum leads to massive fecal calcium wasting and severe bone loss, suggesting a physiological significance of the cecum. In the cecal lumen, free-ionized (absorbable) calcium can be liberated from the complex by a number of dietary ingredients, including prebiotics (e.g., soybeans, raw oat and unrefined wheat) and probiotics (e.g., fermented milk), both of which are health-promoting dietary supplements. Moreover, in the presence of lactogenic hormone prolactin, cecal calcium absorption is markedly increased, with the highest magnitude when compared with other intestinal segment. The underlying mechanism is, therefore, important for nutraceutical research and industry in the development of calcium-fortified pre/probiotics-containing diet for pregnant and lactating women.