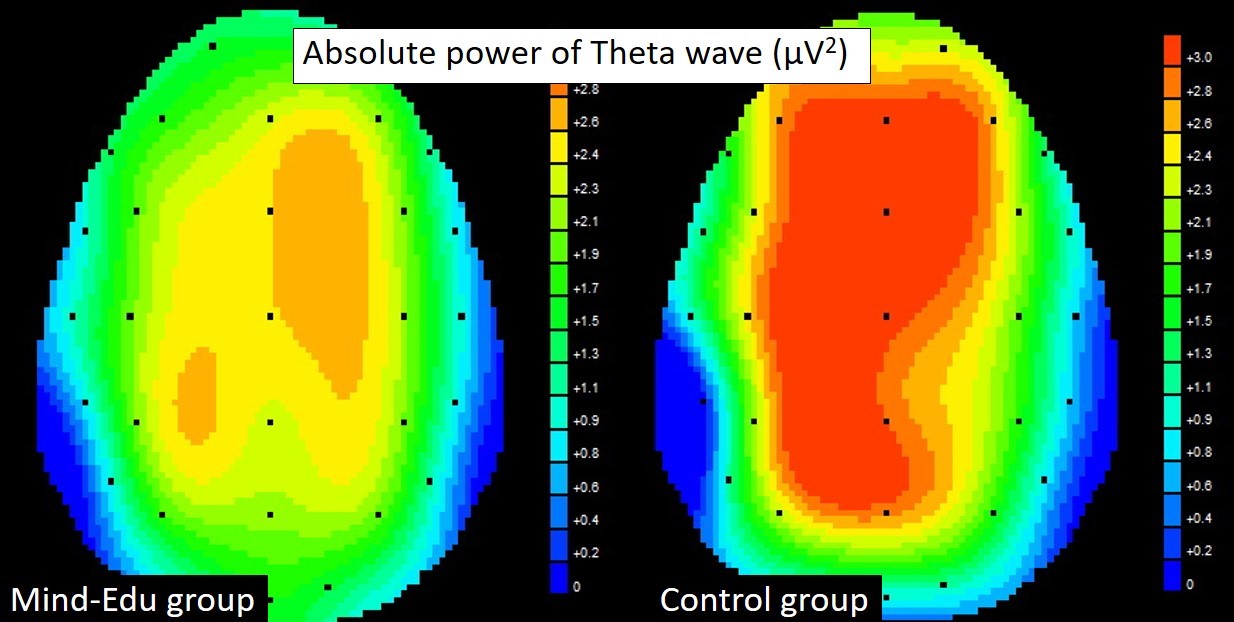 Electroencephalography (EEG) is the neuroscience technique to reveal the neural activities in the brain. This technique is safe and non-invasive, so it can be used for evaluating the brain functions in living humans.

In general, the brain waves recorded from EEG in healthy adults are usually divided into 4 main frequency bands consisting of:

Interestingly, the pattern of brain waves during childhood is different from adulthood. In brief, the main brain wave during awakeness in young children is theta wave that gradually changes to alpha wave when they grow up. Therefore, presence of theta wave during wakefulness indicates childhood pattern brain activities. In contrast, the reduction of theta activities during awakeness in children represents advanced brain development and can be used as a marker for brain maturation.

Our research group uses the concept of an EEG marker for brain maturation to examine the brain development in students who are studying in Buddhist integrated education, a type of integrated education between standard curriculum and mindfulness training, from grade 1 to grade 6 (mind-edu group), compared to aged-match students in a standard curriculum (control group). The EEG results showed that students in mind-edu group had less theta power during resting-state EEG recording (less value – green to yellow color), compared to control group (higher value – red to orange color). The reduction of theta activities during wakefulness is compatible with the EEG characteristics of brain maturation.

Vitamin D is one of the 13 vitamins that we need to maintain our health and wellbeing. We can obtain vitamin D from our diet (oily fish, liver, egg yolks) and additionally we can produce vitamin D from cholesterol when we expose our skin to sunlight. While vitamin D is well known as playing a role in building healthy bones through regulation of calcium and phosphorus, evidence is emerging that vitamin D may play a role in combating infections.

How do viruses make more viruses in host cell? For RNA viruses, the viral RNA-copying enzyme (RdRp) must first latch on to a specific region of RNA, and then proceed to churn out a complete copy of the virus.

Stress can cause many harmful effects to our body including our brain. Stress induces release of glucocorticoid hormone, which prepares our body to cope with stress.

You may know that almost all shrimps you are eating are produced by farming. But, do you know that in order to produce shrimp eggs and hatchings, eyestalks are cut from mother shrimps to induce them to lay eggs?

Neurogenesis, a process of generating functionally integrated neurons from progenitor cells, was traditionally believed to occur only during embryonic stages in the mammalian CNS.

Thalassemia is a wide spread genetic disease presented as chronic anemia. Hemoglobin Bart’s hydrops fetalis, the most severe form of thalassemia, is fatal and uniformly results in still birth when there is a homozygous defect of alpha thalassemia 1.This can be avoided if parents who are carriers for the alpha thalassemia 1 know their genetic status.

Fah talai jone is a well known medicinal plant in Thailand. The leaves are traditionally used to make an exceedingly bitter tea for treating a number of ailments including fever and infections. Because of the extremely bitter nature of the tea, the plant is often taken nowadays in capsule form.

A new study by Assoc. Prof. Apinunt Udomkit found that Bursicon promotes development of eggs in shrimp. Bursicon is an insect hormone known to be involved in darkening of cuticle, wing expansion, and molting.

Melatonin, a neurohormone secreted mainly by the pineal gland, has a variety of physiological functions and neuroprotective effects.

An efficient RNA interference (RNAi) based approach for shrimp viruses inhibition have been developed for a decade. However, the bottle neck of this approach is the application into a farm.